I belong to a lot of facebook photography groups that have thousands of amazing, top end photographers as members. Everyday my facebook feed is filled with gorgeous photography from around the world. It’s hard not to feel inferior when you see shots that you couldn’t even dream up, nevermind take. Whether it’s because you’re stuck in rainy England and you keep seeing stunning photographs from sunny California or the snow capped mountains in Canada, or because you feel like your skill is not quite to their level yet.

Sometimes when I feel like that, I comb through my old photography – if you can even call it that *super cringe* – and remind myself of all the progress I have made as a young photographer. So I may not have taken a kick ass picture of the Golden Gate Bridge in rolling fog, during a sunset… but that doesn’t mean that I’m a sh!t photographer. It doesn’t mean you are either! It’s an art form and a skill that takes time to develop. Since the first day I picked up a camera, I feel I’ve developed my style pretty well, but there is always time for me to learn and hone my skills even further. It’s what makes you a good artist. Challenging yourself to be a better photographer with every press of the shutter.

Instead of feeling crappy about your own work when you see another photographers portfolio, use it as inspiration to learn a new technique, or to take on a new project.

Just to embarrass myself and make you feel better, especially if you’re a new photographer feeling overwhelmed by the huge learning curve, I have compiled some before and afters of my photography in progress. The old pictures were taken between 2005 and 2012, the rest were taken from 2013 onwards.

I think my first macro lens was a Sigma 70-300mm with macro, it wasn’t a dedicated macro lens but it let me take pictures of insects without being anywhere near them so I was good with that. Most weekends I’d be out with my Pentax taking pictures of the flowers in the back garden, learning about depth of field and composition. Even though I ended up being a wedding photographer, those skills I learnt in the garden have helped me immensely.

An amateur photographer with really bad social anxiety is probably the last person you would expect to take up portraiture. I like a challenge though and with that, I conquered my fear of human interaction using my passion for photography. Wahoo!

My friend Rosie (pictured left) was one of my practice subjects back in the day. We’d take really moody and edgy fine art portraits (LOL!!!) in the garden, edit them with the free software that came with my scanner and post them on MySpace! We were sooo cool.

I also took a lot of self portraits – ya know, cause of that social anxiety thing I mentioned?! Well, the left image was taken with my camera on a gorillapod which I strapped to a tree to get a good vantage point. Except, I didn’t have a remote shutter back then so had to reach the shutter myself to take the picture. May as well have just taken it handheld really, but where’s the challenge in that?

Left one was a self portrait in the back garden. It was gonna be so cool with the dandelion blowing away in the wind. Well it would have been cool, if I’d have separated the background with a nice shallow depth of field.

Both pictures of Kitty Von Crypt. The first one being one of my first model shoots EVER. We both started our careers around the same time and this was from a shoot in Rhyl (the most stunning place on earth – you should visit) and neither of us had a clue what we were gonna shoot so we just walked for miles shooting in every cool location we could find.

It’s Rosie on the left again! Sorry Rosie,  but look at those editing skills! I don’t know if that’s sepia, or black and white, or something entirely different but whatever it was I think I nailed it. I was pretty shit hot at make-up too, as you can clearly tell.

Another self portrait comparison. GOTH4LIFE! The left one was taken in my bedroom turned studio, on a self timer and clearly I missed the focus on my face so I made it up in Photoshop 7 by sharpening the shit out of it. I still have that coat too btw.

Still an area of photography that I’d like to make more progress in, as it’s not something I get to do often. I definitely think I’ve improved though… I hope…

Foggy morning with a Fuji Finepix and no concept of how to take an atmospheric shot on the left. On the right, the fog rolling in during an evening which I’d planned to take Milky Way shots – whoops. 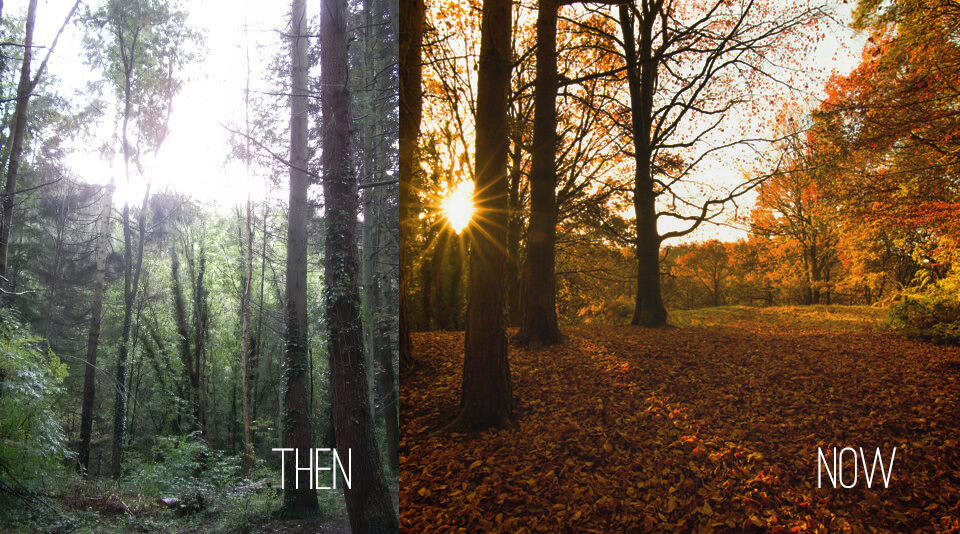 I don’t even remember the name of the digital camera I used on the left – it was my first digital, a little compact that wouldn’t even compete with a mobile phone these days and the memory card I had was so small, I could only store 5 photographs at a time. BUT I could see my photos straight away – which was awwwwesome.

The picture on the left was my favourite photo ever at the time. Look at the sun beaming through the tree, look at how the branches frame the photo… wow. just wow. I was the next Ansel Adams….

Okay. Those of you who live in or know my home town of Connah’s Quay (it’s a paradise – you should visit) are probably wondering why I ever thought it would be a good idea to shoot landscapes there. But that was the nicest view I could get, and look at those clouds! Overblown highlights? Suuure, but dramatic? Yeess.

I didn’t really start shooting children portraiture until the second year of my business apart from the one on the left. I asked a friend if she wanted a free shoot so I could practice mah skillz. A telephoto lens would have come in real handy for this shoot but I only had a “nifty fifty” and I had no idea what to expect, or how to compose a good shot of a very hyperactive kid. It went better than expected though and it was a great learning exercise.

And last but not least, weddings. My speciality. My jam.

First was a styled bridal shoot that we’d set up for portfolio purposes. There are a few from the bunch that I still really like but this one isn’t composed very well and I have the model looking straight at the camera.. which is something I try and stay away from as much as I can with wedding portraits nowadays. The second shot was from a wedding last June, still a posed shot but a more natural way of doing it – not looking at the camera, body a little more relaxed etc.

Just like child portraiture, I didn’t venture into weddings until my business was up and running. I did some second shooting for other photographers before I took on my own, so that helped me a lot in getting the practise I needed. I don’t think weddings are something you should take on if you’re not confident in your skills as a photographer. I definitely see some improvements in my work though, not just as my equipment gets upgraded and built upon but as my posing style becomes more refined. I actually really love this shot on the left, I’m a huge lover of foreground bokeh and I still think it’s a nice intimate pose.  The shot on the right is from a very recent wedding and pretty much sums up my wedding photography style and where I’ve been directing myself in terms of posing my couples. My goal is natural, fun, personality driven photographs. The more candid and natural the better!

So there you have it – my photography in progress – I hope that makes you feel a ton better about your own work. I sure feel relieved.

My approach to photography is relaxed and super fun. It's important to me to capture your personality and to record those special moments as they happen.